How it was Done

After good feedback from the last post about how it was done, here goes details about how the shots I put up yesterday were captured:

Hopefully this shows that you dont need lots of fancy equipment and a studio to get reasonable images.

Shot 1: Overview of the garage that was turned into a studio. Had to run 10 metre power cable from the house to run the lights. 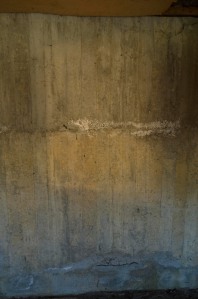 Shot 3: First test shot with camera set at f3.8 at 1/125 sec 800 ISO this was with the garage door open which let in more light than I wanted as well as the bluish colour cast at the bottom of the image. I also didn’t like the shadow in the upper right of the frame and so adjusted the barn doors to take this out.

Shot 4: After closing the garage door and setting the camera focus to about 1.5 metres as well as adjusting the camera to f5.6 at 1/60th second I took the first shot with me in it. With self portraits its always difficult to pinpoint where you are supposed to stand, most of the time it’s just trial and error… I sometimes put a light stand in the shot to get the centre and to use as a reference for focus… This time I just guessed and was off centre which I liked anyway. After looking at this shot on a computer I liked the way the light on the wall darkened at the right and the light on me darkened on the left. I knew there would be enough information to make it easy to add more drama in Lightroom and Photoshop.

Shot 5: Props and Action! Yes I did give myself a Mohawk for the day just for the heck of it (its gone now) This is shot no. 23 Unprocessed straight off the camera in Raw. I have to say its the weirdest feeling using studio lights and setting off the camera with none of the usual loud popping noise that accompanies strobes going off.

Shot 6: Final Rendition. Image has been recropped and Lighroom adjustments have been made to make it darker and more dramatic (Direct Positive, Vignette and Exposure decrease).  I have a tendency to make stuff darker rather than lighter since that seems to be my base aesthetic.

If people keep showing a continued interest in this type of post then I will try and make it a more ongoing subject of this blog.